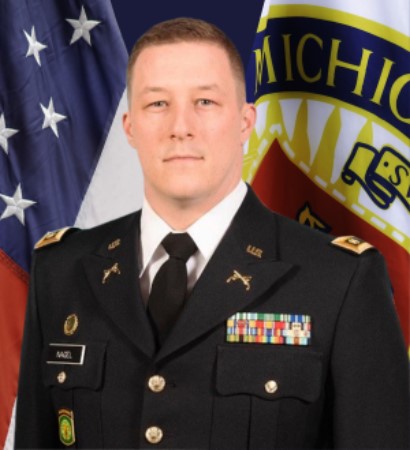 Military and Civilian Education: MAJ Nagel graduated from Cathedral High School in 2001 and obtained his BA in Philosophy from Indiana University, IN in 2006. MAJ Nagel earned his Master’s degree in Security and Safety Leadership from George Washington University in 2015. MAJ Nagel attended Military Police Officer Basic Leadership Course at Fort Leonard Wood, MO in 2009 and is currently enrolled in the US Army’s Command and General Staff College Intermediate Level Education course.

Assignments: MAJ Nagel’s first assignment was as a Military Police Team Member, 324th MP Detachment in 2004. In 2006 he deployed to Iraq in support of Operation Iraqi Freedom. After returning from Iraq he accepted a direct commission as was assigned as a Platoon Leader for the 324th MP Detachment in 2008. In 2009 he deployed to Kuwait as a Host Nation Liaison Officer for 3rd Army. In 2010 he was appointed the Company Commander of the Headquarters, Headquarters Company, 391st MP Battalion. After completing Company Command, he was assigned as an assistant Inspector General with the 310th Expeditionary Sustainment Command in 2014. Currently, MAJ Nagel holds the position of Operations Officer for the 336th Military Police Battalion.

Personal Accomplishments: In his spare time, MAJ Nagel is a blacksmith who is specializes in custom hand forged knives. He was featured on the television show Forged in Fire on the History Channel in 2018 where he competed against 3 other US Military Veterans and won the title of Forged in Fire Champion. MAJ Nagel was a finalist in the grand championship on the Television show Knife or Death where he competed against the best blade-sport competitors in the county. MAJ Nagel will again be competing on History Channel’s Forged in Fire later in 2020.